Carbonet.pl Co. Ltd. is a startup created by Regional Development Agency in Bielsko-Biała and an innovator – Smart Cables Co. Ltd. The aim of the project was creating a system of land transport protection and real-time monitoring.

COMPOSITE TARPAULIN WITH AN ALARM SYSTEM

Our team has worked out an innovative composite mat, which can be stuck on tarpaulins. In case the tarpaulin has been cut or the back door has been opened due to an unauthorized access the system activates an alarm and light signal. Additionally, the system sends photos from the camera and a GPS fix to the indicated e-mail address or telephone number.

The system allows for mounting of 4-8 cameras monitoring a vehicle in high-definition quality. The vehicle’s black box records the footage from cameras onto SD cards or hard disk. The vehicle’s monitoring can be viewed in real-time from any place in the world on computers or smartphones.

HOW DID OUR IDEA ORIGINATE

The main problem of the road transport industry are cargo thefts. They concern 75 % of transport companies dealing with international shipping (data based on Polish transport industry research). Each year the losses caused by cargo thefts in EU amount to about 8-10 billion euro. Out of that 80 % is stolen “on wheels” that is during transportation. It means that the content of 550 semi-trailers (each one is worth on average about 50 thousand euro) disappears each day in the European Union. A new problem for the industry are immigrants. They devastate trucks and cargo, assault drivers near Calais and in Belgium. High penalties have been introduced in Great Britain for smuggling in an illegal immigrant. The industry does not admit to losses, which customer would like to put his cargo at the risk of theft. Entrepreneurs include a great deal of petty thefts in transport as expenses, that is why it is very difficult to evaluate the scale of the phenomenon. In Poland the thieves aim mainly at expensive and easily sold goods: 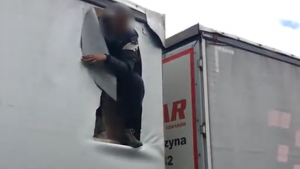 From the Polish investigation of the phenomenon it turns out that 70 % of the carriers have been robbed of the transported goods. Only in 3 % of cases the goods have been successfully recovered and the perpetrators caught.

Another alarming phenomenon are high transport insurance costs. Insurance often does not cover the costs of fuel theft or goods theft. In insurance contracts there are exclusions and clauses.

At present, unclear changes related to an attempt to introduce new regulations concerning posted workers in transport, may bring about a considerable decline in the competitiveness of Polish transport companies. The solution will be tightening of losses connected with goods thefts and lowering insurance costs of goods transport, due to the application of intelligent security and monitoring systems of semi-trailers.

The Carbonet.pl interdisciplinary, international research team has developed a technology of composite mats, which can be stuck on the existing tarpaulins. The tarpaulins which are created from scratch with an embedded mat in the PVC, have been produced at the second stage. Creating our product required long-lasting preparations, prototype tests and knowledge from different fields of science. The team was composed of specialists in composites (working earlier at building gliders), programmers (working at building public administration systems), electronic engineers, research workers, IT computer networks specialists and an experienced project manager.

Carbonet.pl Co. is a joint venture company – it was established on June 30, 2017 as a result of research work, which brought about commercialization of products and innovative services. Within less then half a year the startup has created its range of products for transport industry and it is still developing. The company plans to introduce smart transport solutions for urban and passenger transport, as well as solutions for building industry.